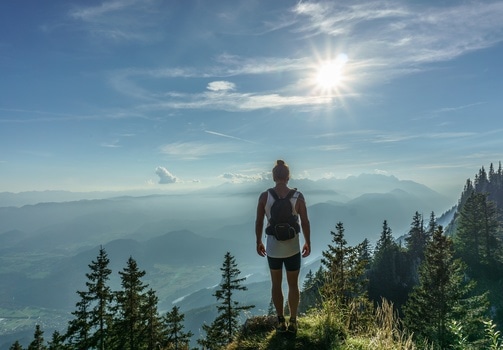 I stare down at my tennis shoes. I am poised at the edge of the sidewalk. Before me the dirt path winds up the mountain. Straight up. So far the trail has been inclined, but not too crazy.

Here is where things get harder.

I take one last look at the sun behind me. It is right above the horizon. Fifteen minutes until sunset. I better get moving. I step off the sidewalk onto the dirt path and start to climb.

***Three years ago, I didn’t even know this path existed. In fact, I would have laughed in your face if you told me I would be able to walk several miles and hike straight up for another without keeling over. Three years ago I was a different person. Most of my life I have fought a constant battle with chronic illness and depression. After some pretty traumatic experiences, I could barely get out of bed and drag myself to work. My body didn’t function anymore. It felt like every month or so my organ systems would threaten to shut down. None of the tests were ever conclusive, but always vaguely alarming. Still, I tried to create a stable life with good friends and a supportive family. Every day was a struggle. I went to therapy, did the work, and found small moments of fulfillment and happiness.

But after more inconclusive tests, my doctor announced that I needed to get moving. My health would probably never be great, and I needed all the mental and physical benefits of exercise. I couldn’t wait until I felt good; I had to do it now. He suggested low impact, weight bearing exercises and maintaining a positive attitude. I could have punched him in the throat. How on earth was I going to “move more” when just making dinner felt impossible?

I started painfully slow. I found some YouTube videos of yoga routines. I bought a yoga mat. After work, I trudged around the block. This stage lasted forever. Sometimes I would throw-up from sheer exhaustion after that slow walk.

Months passed. I was walking farther. I wasn’t so sore after doing yoga. I was slow, but it was getting better. I even had to get a new pair of tennis shoes.

One day, I noticed a street that I had never been on and decided to explore. It led to a trail-head that went straight up the mountain above my house. On a crazy whim, I followed it. After a half a mile or so, the sidewalk ended and I could see a dirt path winding up, and up, and up.

I turned around and went home.

For months, I meandered up the road, but I never had the courage to take the winding dirt path.

Then one day I did it. My lungs burned. I huffed and puffed as I focused on putting one foot in front of the other. After an eternity, I reached the top of the trail and turned around. Before me I could see the entire valley bathed in the rosy glow of the setting sun. I felt the light on my face, the wind in my sweat soaked hair. I looked down and saw my house, tiny, and shadowed. Up here it was magical. I felt like I might be able to fly. My endorphin soaked brain sang, “This is who I want to be. This is how I want to feel.”

And so, every day I climb my mountain. I hit the trail so that I can see the sunset when I get to the top. I take pictures. I meditate. I find some peace. Then I head back down to earth with renewed belief in myself and my body. I can do this. This is who I am. When I come off the mountain, I know how strong I am.

All of us have our stories. There are many paths that have led us here. We have pain, betrayal, and suffering. We feel alone. We feel lost. Some of us are on the brink, and we don’t know if we can keep fighting this uphill battle.

But we can.It may be painfully slow. We might want to throw-up, but every day we climb, we get stronger. And when we reach the top—and we will—we will feel the sun on our faces and the wind in our sweat soaked hair, and we will finally know how strong we are.

Keep climbing. Bloom is right here with you. 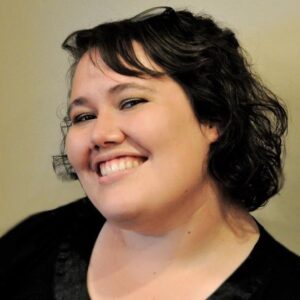 Alisha Geary is a writer, a dreamer, a pumpkin pie eater. She is an obsessive journaler, a reformed book hoarder, and a ukelele player. She has written for Leatherwood Press, Deseret Book, GeekTyrant, and Boostability. Alisha also taught college writing for thirteen years at Utah Valley University and Salt Lake Community College. Now she handles all the words for Bloom as the Director of Content Development. When not writing, she is probably singing or cooking. She has a Master’s Degree in Literature and Writing from Utah State University.
PREV ARTICLE NEXT ARTICLE